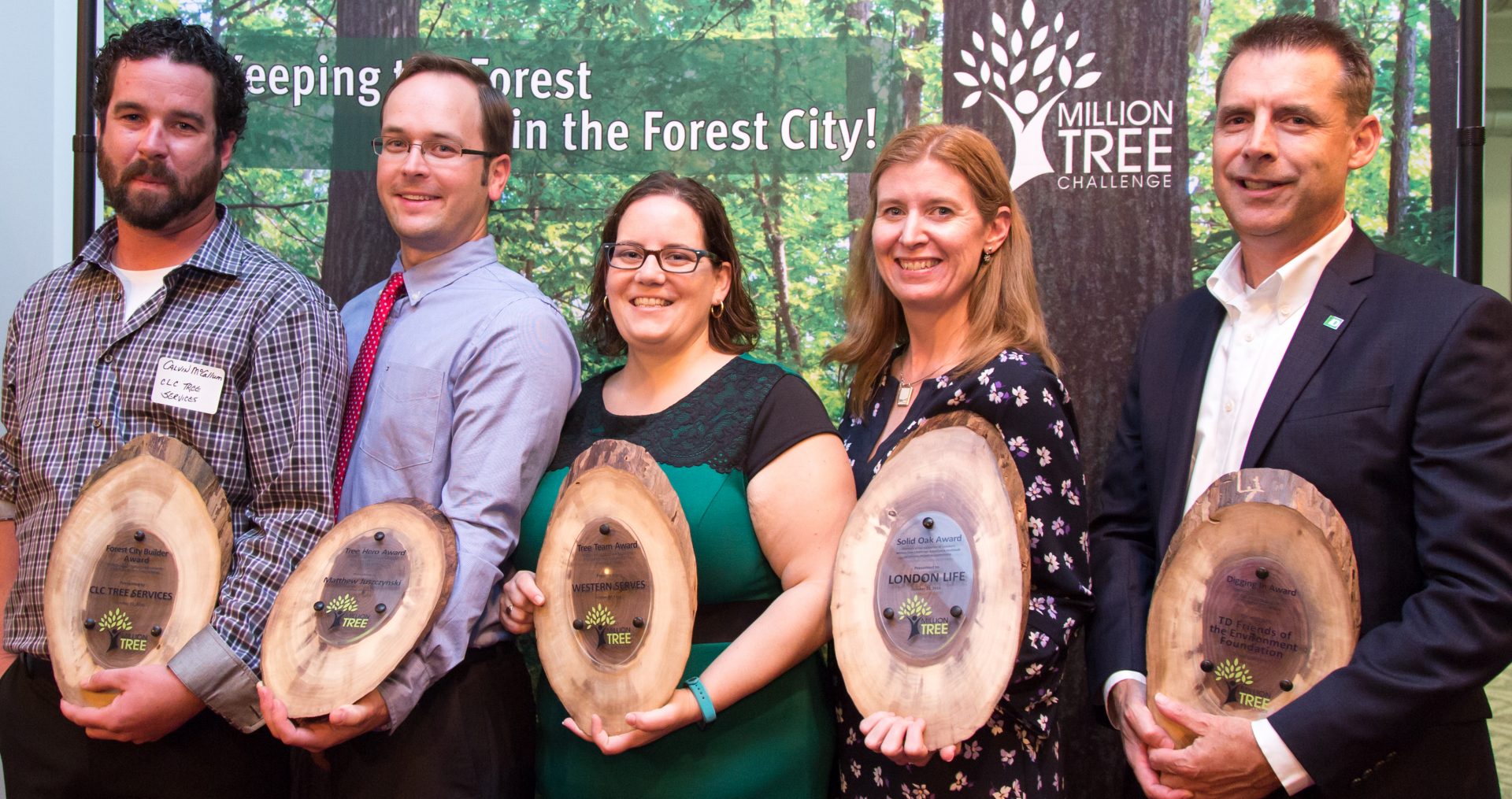 The first Million Tree Challenge Awards were presented to five well-deserving Partners in London’s Million Tree Challenge on October 20, 2016 at the annual A Toast to Trees event. These awards recognize great contributions by businesses, organizations and individuals who are making a difference through their support of tree planting in London, Ontario.

The Solid Oak Award honours a high-level supporter of London’s Million Tree Challenge based on a multitude of actions including sponsorship, and the first Solid Oak Award was given to London Life.

London Life has been the lead sponsor of ReForest London since 2009, as well as a major employer in our community since their founding in 1874. There is perhaps no business in town that has been part of the Forest City longer.

The team at CLC Tree Services has been caring for London and area trees since 1988; and are proud to have been voted “Best of London” winner for their tree services category the last 3 years running.

The Digging In Award honours special achievements in tree planting in London, Ontario by a local organization and the first Digging In Award was presented to TD Friends of the Environment Foundation.

You may know TD Friends of the Environment for their longtime and steadfast support of environmental initiatives through their granting program. Since its founding by TD Bank Group in 1990, TD Friends of the Environment has provided approximately $76 million to over 24,000 environmental projects and programs across Canada, funding everything from tree plantings to butterfly gardens to solar energy projects

However, this award is for special achievements in active, get your hands dirty, tree planting and they have that covered with TD Tree Days. Since its launch in 2010, thousands of volunteers – from Brownies to bankers – have planted over 235,000 trees through TD Tree Days in over 230 communities across Canada, including almost 13,000 trees in London alone over the course of 20 events.

To date, Matthew has fund raised over $40,000 in funding and match-support for projects in his community, which has grown from his initial vision to: two naturalization plantings, the construction of an outdoor classroom at St. Roberts Catholic Elementary School, a naturalization planting at Mary Immaculate Parish, and a park naturalization at nearby Nelson Park. He’s also helped coordinate door-to-door tree blitzes and tree giveaways in Argyle.

Thanks to his vision and passion, Matthew has seen over 1,000 native trees and shrubs planted in his neighbourhood.

The Tree Team Award honours a volunteer group giving their time to planting and caring for trees in London, Ontario and the 2016 Tree Team Award was presented to Western Serves.

Western Serves is a campus-wide program of Western University which allows students, staff and faculty to get engaged with nonprofit organizations in the London community, helping raise awareness of the social issues they tackle, and leading a boost to fulfill their respective missions.

Since they began planting with ReForest London in 2007, over 655 volunteers from Western Serves have planted 3,802 native trees and shrubs in 9 different parks. “Western Serves are consistently one or our hardest-working teams of volunteer and demonstrate just what tomorrow’s leaders can accomplish,” said Amber Cantell, Director of Programs for ReForest London.

Congratulations to these five award recipients for all their dedication and passion for the environment as they work towards keeping the Forest in the Forest City.