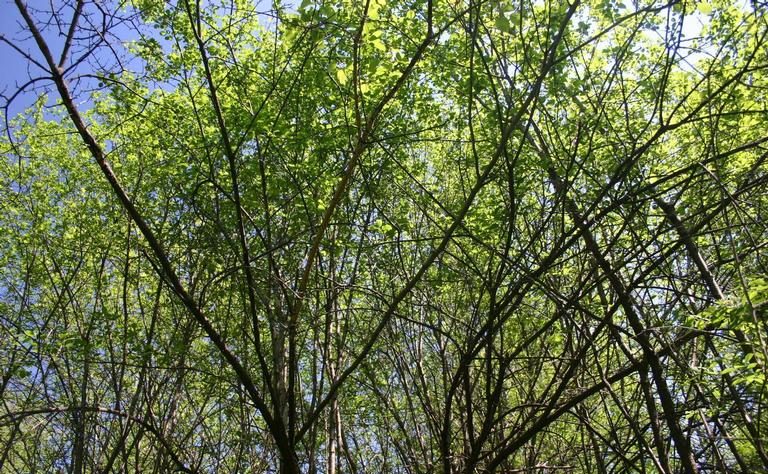 Invasive tree species are non-native trees that are introduced into local areas or environments and quickly outcompete the native species. Typically, these invasive species get brought over accidentally by animals and humans. Invasive trees take over the land and reduce the population of native trees. Once introduced, they are nearly impossible to remove completely.

There are a number of invasive species that are currently threatening Canada’s forests, ecosystems and habitats. London has many invasive species, but there are four common tree species that should be identified and studied to be better prepared and educated when planting or removing trees.

Norway maples are notorious for their dense shade and shallow roots, which makes them very difficult to garden under and plant around. Fortunately, they are also especially susceptible to maple decline.

This invasive tree has similar leaves to our native sugar maple, which often causes confusion and issues with identification. The important differences between the two lie in their maple keys (helicopters), their bark and in the colour of the juice that comes out of their leaf stalks when plucked.

The European Buckthorn grows along the edges of almost all of London’s natural areas and woodlands. Unfortunately, it now holds the title – along with the Norway Maple – as London’s most common tree.

This tree gets its name from its long, stout branches and appear to be reaching up into the sky. Extremely tolerant of urban conditions (and in particular pavement), it will grow in just about any nook or cranny where it can set seed. It is also known as “stinking sumac” because of the unpleasant smell that can come from its leaves and twigs when bruised.

Sycamore maples thrive in areas with disturbed soil and have a high tolerance of pollution and road salt, which made them a popular choice for planting in cities; however, this was problematic, as it quickly out competed native trees. sycamore maples can produce “dense strands of trees with the potential for crowding out native plant species.”

Invasive species are often hard to kill, which poses many challenges to mitigating damage to the environment and slowing the spread of the species. Cutting them is usually ineffective, as they simply re-sprout at the remaining trunk. One solution is to pull the entire tree or shrub out of the ground.

ReForest London has five Weed Wrenches. A Weed Wrench is an easy-to-use tool that grabs the base of the tree or shrub and allows you to pull it out of the ground, roots and all. The weed wrench gives you the leverage needed to remove trees 1 inch in diameter without having to cut them.

Help London manage invasive species! Please contact us to arrange a date and time to borrow (for free) one of our weed wrenches to clean up your own property.

Previous
Go back to Resources
Next