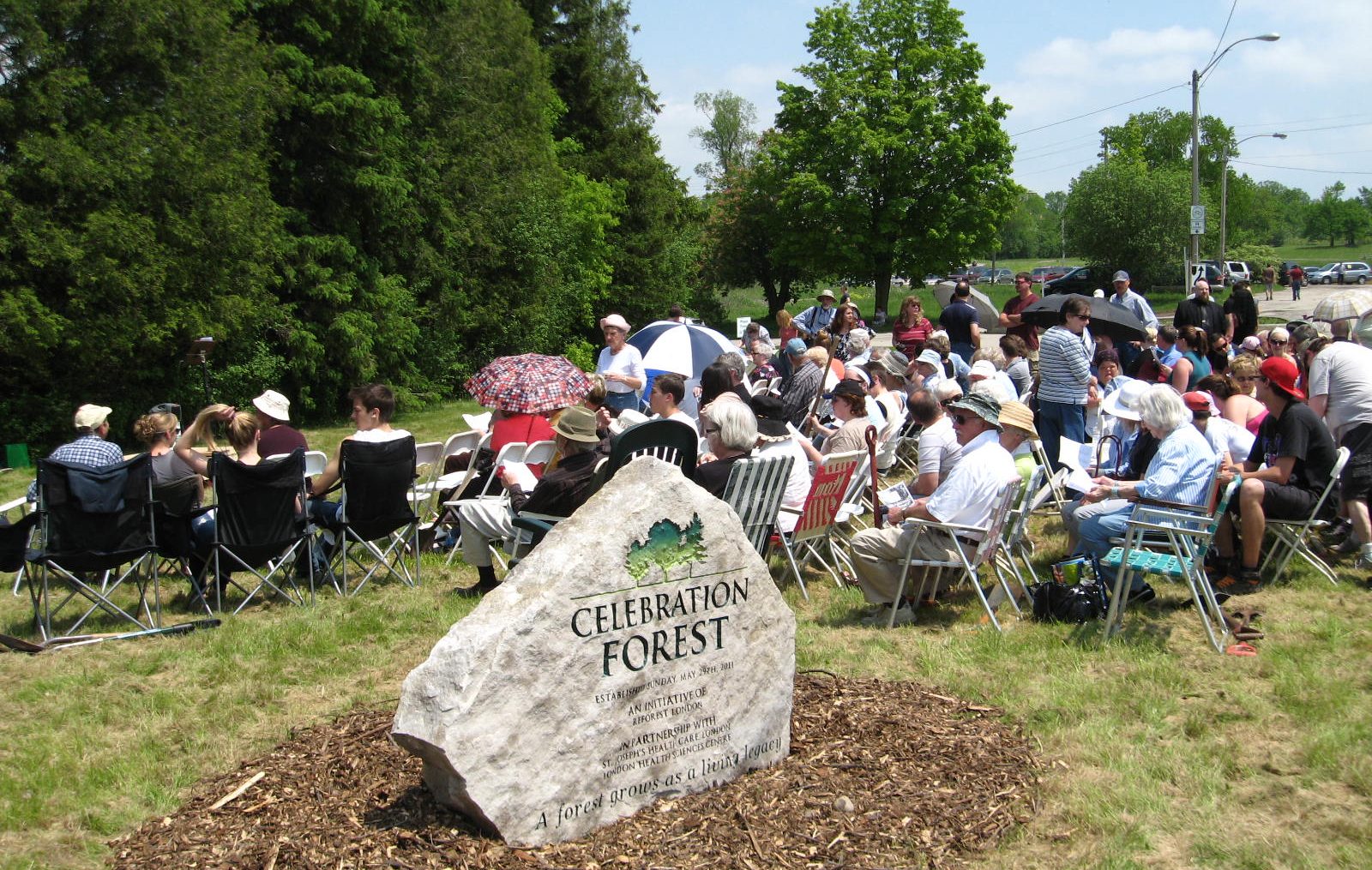 A forest grows as a living legacy.

Londoners came to honour fathers and mothers, grandparents, children, siblings, spouses, friends, and even pets. And when they left, 300 new trees stood to commemorate those who are gone and remembered and those who received a tree as a gift.

On Sunday, May 29, 2011, ReForest London officially opened its Celebration Forest! Celebration Forest is a way for families and friends to celebrate and commemorate loved ones, as gifts or as memorial trees. The Forest will be added to annually, with each year being assigned a signature native tree. To kick off the Forest, the 2011 selection was the sugar maple.

The 6 hectare site, situated near ReForest London’s headquarters in the Westminster Ponds Environmentally Significant Area, was designated by St. Joseph’s HealthCare, the City of London and London Health Sciences Centre for tree-planting as part of their ongoing commitment to the health of Southwestern Ontario’s people and the environment. More than 5 hectares will be planted as forest.

Participants were given a brief yet thorough demonstration of tree-planting techniques by ReForest London Director Julie Ryan and Project Manager Amber Cantrell. Once the ribbon was cut to officially open the Forest, the crowd moved down the wood chip path to pick their preferred spot for their tree. Volunteers were available to help with planting or provide advice to ensure the trees got off to the best possible start.

The event was notable for the number of families who gathered to celebrate a departed family member. Amongst the more than 200 participants, which ranged from toddlers to seniors, were 10 members of the Watson family, led by three daughters who were planting 6 trees in “Gordon’s Grove,” in memory of their father. Gordon passed away in August of 2010, but “loved his place in the shade,” his daughter said.

A group of 20 family members and friends combined to create a living tribute to Nicole Pow, who passed away at age 35. Ten small trees were planted as a perpetual, growing reminder of their love for Nicole.

Also honoured was Mary Kerr, a long-time London naturalist and friend of the environment, who was recognized as ReForest London’s first “Tree Hero.” A large sugar maple was planted in Mary’s name in appreciation of her decades of dedication to London’s trees. Mary also received a framed certificate and a beautiful, gold-dipped maple leaf necklace.

The ceremony and tree-planting will be repeated annually. To enquire about planting a commemorative tree, contact ReForest London at [email protected] or 519-936-9548.