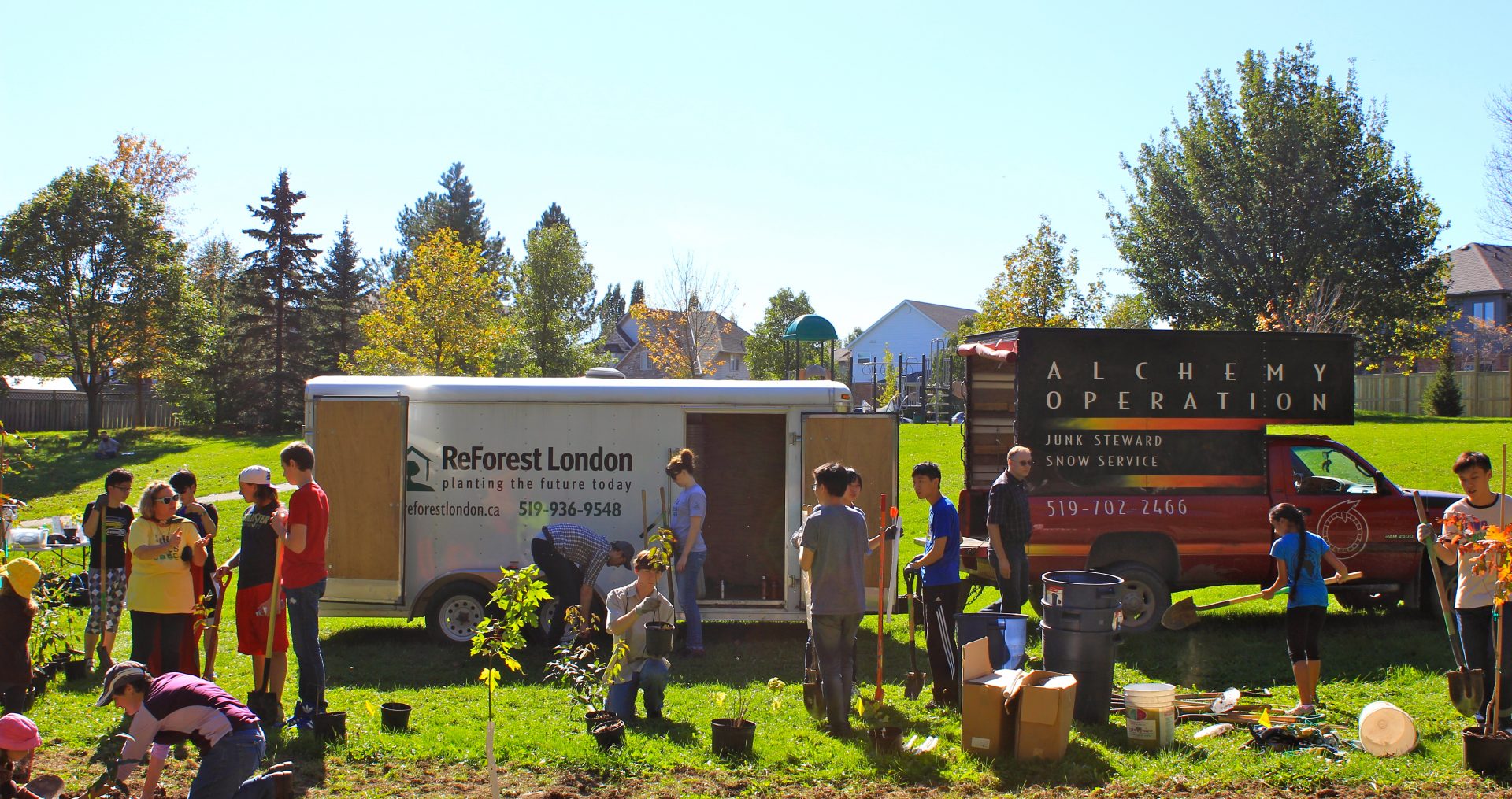 ReForest London held another successful tree planting this past Saturday October 12th in Helen Mott Shaw Park, a woodland just west of Masonville. Despite it being the Thanksgiving weekend, the project had another overwhelming turn out of over 50 volunteers. The team pitched in to plant 150 native trees and shrubs in an area that has been heavily affected by the Emerald Ash Borer. Many of the volunteers were students from the London International Academy who read about ReForest London online and decided to join the cause and give back to their new city.  London City Councillor Matt Brown also stopped by to thank ReForest London and their volunteers for their hard work and dedication to repairing the damaged forest.

The devastation by the Emerald Ash Borer – a small beetle that eats the underside of the bark and eventually kills the tree – cannot be ignored in the park where you can see many dead trees in the tree line alone. Ash is one of the most common species of trees that grow in the forests of Southwestern Ontario and it accounts for ten percent of London’s trees. The Emerald Ash Borer is expected to kill nearly all of them, meaning London will lose over 600, 000 of its trees – a devastating blow for the Forest City. Luckily, the good people at ReForest London and their dedicated team of volunteers have been at work planting trees to help repair forests in parks like Helen Mott Shaw and others all around the city.

Projects like this are funded through the generous support of Environment Canada and lead sponsor London Life.  This particular event was also made possible by ReForest London’s youngest sponsor, nine year old Eden, who raised 400 dollars—or 40,000 pennies—for the cause. Every year for her birthday, instead of the typical celebration, Eden finds a new way to give back to her community.  In years past she’s organized toy drives for Children’s Aid, clothing donations for the Women’s Shelter, and book donations for the Children’s Hospital. This year she chose to work with ReForest London as trees have always had a special place in her heart, “I was born on a Jewish holiday celebrating the birthday of the trees so trees are very special to me and I thought it would be cool to do trees for my birthday.”  Calling her project “Pennies for Paradise,” Eden was able to collect donations from the piggy banks of her classmates and friends. As a thank you for her generous support ReForest London awarded Eden with her very own red bud tree to plant at home. She also received a special thank you on behalf of the city from Councillor Brown who praised her for being a role model for the city by “setting the tone and raising the bar for others.”

Though there is still much work to be done here in the city, thanks to the efforts of all of the volunteers at Saturday’s tree planting, Helen Mott Shaw Park has 150 new trees that will develop overtime into a gorgeous forest. Not only are these dedicated tree planters giving back to their city, they’re also having a great time being active outside, spending quality time with friends and family, and coming together as a community to work towards something great.  If you’d like to share in the rewarding feeling that comes with planting trees, join the ReForest London team on Saturday October 19th at the Thompson Road Park Tree Planting or check out the website for other upcoming events.